Think, but not make thoughts your sole aim;

Dream, but not make dreams your sole master;

Bath in a different light than the light of the day;

Fathom the night, it cheats time and makes reality sleep.

I was born in 1963 in Athens, Greece and attended state schools in the Kipseli district. I was serenated by the out-of-the box thread of ideas and dialectic woven at the famous Pi enclave of Fokionos Negri.  I received my BSc in Economics from the Athens University of Economics and Business.

In 1987, I decided to part from the Big Blue and the liberating Light of the Attiki region and my beloved  Aegean islands being lured by the Infinite Grey of a little corner of northern Europe in my quest to further educate myself. I read for an MSc and PhD in Economics at Birkbeck College, University of London, UK.

I was privileged enough to be educated by many esteemed academics but I can effortlessly single out two prominent figures that influenced my intellect, Professor Ron Smith and my mentor, PhD supervisor and co-author, Professor Dennis Snower. Collaborations with Dr Hector Sala and Dr Roberto Bande have matured over the decades into close and enduring friendships. Professor John Hatgioannides is my lifelong partner as well as co-author and inspiration. Professor Menelaos Karanasos is my (not-so-little) brother and sibling in my long educational trajectory.

Research consists of seeing what everyone else has seen and thinking what no-one else has thought.  Sir Isaac Newton wrote that “he stood on the shoulders of giants”. In my modest academic endeavours, I was swayed by the diverse pillars of the theoretical corpus erected by anarcho-communists such as Michael Bakunin and Pyotr Alexeyevich Kropotkin, communist Karl Marx, American institutionalists such as John Commons, Wesley Mitchell and  Thorstein Veblen, the philosophy of Friedrich Nietzsche, Arthur Schopenhauer, and Ludwig Josef Johann Wittgenstein, the works of Michal Kalecki , Antonio Francesco Gramsci and John Maynard Keynes; the latter famously and brilliantly  summing up my critical stance to jejune mainstream economics: “Capitalism is the extraordinary belief that the nastiest of men for the nastiest of motives will somehow work for the benefit of all.

After a 6-year spell as a teaching/research fellow at Birkbeck College, University of London, I joined the School of Economics and Finance at Queen Mary, University of London, UK, in 1997 initially as a Lecturer, then promoted to Senior Lecturer and subsequently to a Reader. During my long tenure at QMUL, I have been instrumental in launching new Bachelors and Master degrees, leading their administration and developing and teaching a number of cutting edge BSc and MSc modules with excellent feedback from students.

In 2006, I became one of the founders of the electronic, peer-reviewed scientific journal Quantitative and Qualitative Analysis in Social Sciences (QASS), in which I act as the Economics Editor.

I am also a long standing Research Fellow at IZA, Bonn, Germany, and a member of the Higher Education Academy, UK.

I retired from my full-time academic duties in November 2018. As the German philosopher, Arthur Schopenhauer wrote, the shortness of life, so often lamented, may be the best thing about it. After all, committed academics rarely and truly retire, they just lose their faculties. At that stage of my life, I felt that it is necessary to be underemployed if you aim to continue doing something rewarding and potentially significant with your research. I decided to break free from the stranglehold and insipid demands of the toxic Research Excellent Framework (REF)-and its previous variations like the Research Academic Exercise (RAE)- which have rendered academic freedom and joy in carrying out research into an alienating publications Fordism.

I was playing volleyball (at a professional level bar the salary) for 25 consecutive years, initially for Premier League teams in Greece and subsequently for Britannia and the University of London Union (ULU) team in the UK. Under the stewardship of Paul Westhead, the coach of Britannia volleyball club, I learned the how’s and why’s of modern volleyball. I was coaching the women’s ULU team for a number of years and acted as the Secretary of the London Volleyball League.  I was fortunate enough to play indoors volleyball for ULU with two setters, the talented Dr Kristina Sagen-Abdat and the determined Karen Rossi. 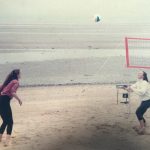 With Kristina, we formed a memorable pair in beach volleyball as well and are relishing a close and lasting friendship. With Karen, we shared also our affinity to big motorbikes.

I always have been an avid traveller, having visited with my husband a large number of wonderful and exciting places across the globe, mingling with locals, observing and admiring fascinating cultures and traditions.

What stands out as a unique experience is our seven times  stays in Cuba travelling repeatedly on our own throughout the island.A truly unforgettable and transforming moment was listening , at a close proximity, to the last public address on the 1st of May 2006 of Fidel Castro, the legendary Comandante-En-Jefe and an exceptionally compelling and eloquent orator, at the Plaza de la Revolution in Havana in front of at least 1 million people. His famous words of 1953 repeated on that very day were vindicated in my psyche: “I know that the regime will try to suppress the truth by all possible means; I know that there will be a conspiracy to bury me in oblivion. But my voice will not be stifled-it will rise from my breast even when I feel most alone, and my heart will give it all the fire that callous cowards deny it…Condemn me. It does not matter. History will absolve me.” 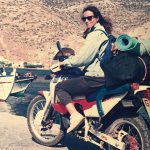 My motorcycle diaries from my trip from the UK to Greece when I rode on my own my temperamental, albeit a joy to drive, Aprilia Tuareg 600cc bike, may not be as famous as the ones by Ernesto “Che” Guevara and Alberto Granado across South America but nevertheless, replete with stupendous entries. Experience, familiarity and renewed courage matter; I was on the saddle with my partner in our earlier two long adventures across Europe in our Honda Custom VF 750cc motorbike.

In May 2015, I was suddenly diagnosed with Multiple Sclerosis (MS), an idiosyncratic, debilitating and incurable disease.  The remitting/relapsing early phase (the “honeymoon” period as many physicians hilariously call it) gave way a few years later to an aggressive unfolding which made me wheelchair bound. I had to learn to live as a seriously disabled person, or more pertinently as I say “differently-abled”, and rely on 24/7 care provided by my determined husband with patience and bliss.  Because of MS, I had to give up one my life’s passions, riding a motorbike and was not possible to fly to Cuba again to see Havana Moon, the once in a lifetime concert by the Rolling Stones in 2016.

I am fortunate enough not to rely upon the despicable outsourcing of UK Social Services in the post 2010 era of austerity for the poor, vulnerable and disabled. Nevertheless, I had faced discrimination through the lack of adequate facilities for powered wheelchair users in my University workplace. In the last couple of years of my full-time academic service I had to fight devious practices, hostility and pitiful machinations of my line manager and HR, personnel who whilst standing for nothing moral fall for anything amoral.

My life with MS has “ripped open my soul” as Edvard Munch’s  wrote  in 1893 when he painted the first two versions  of his revolutionary  masterpiece, “The Scream”.  There are comparably iconic works in the world of art and beauty , Van Gogh’s “The Siesta (after Millet)”  is probably my favourite, reminding me the afternoon rest with my partner at the grape plantations in Crete, Greece when we worked  as seasonal workers in the summer of 1982 at the end of our first year at University. However, I lately identify myself with the screamer of Munch, a figure which may be even a ghost or ghoul. Clad in a dress or tight robe, its face is reduced to a caricature of dread beyond words; it does not look at the mad sky split open not just in clouds of red but in a bloody, volcanic atomic rupture in the fabric of reality itself.  The screamer, next to the railings and walkway rushing away in steep perspective to the left of the scene with the paranoia-inducing two figures walking away, does not look at the apocalyptic sunset over fjord , but directly at me. It is me. 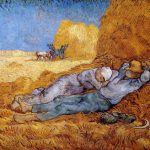 I know that probably I will never walk alone again but I persevere and obstinate. Perseverance often comes from a strong will, obstinacy from a strong won’t.  After all, when you reach for the stars you may not get one, but you won’t come up with a handful of mud either.